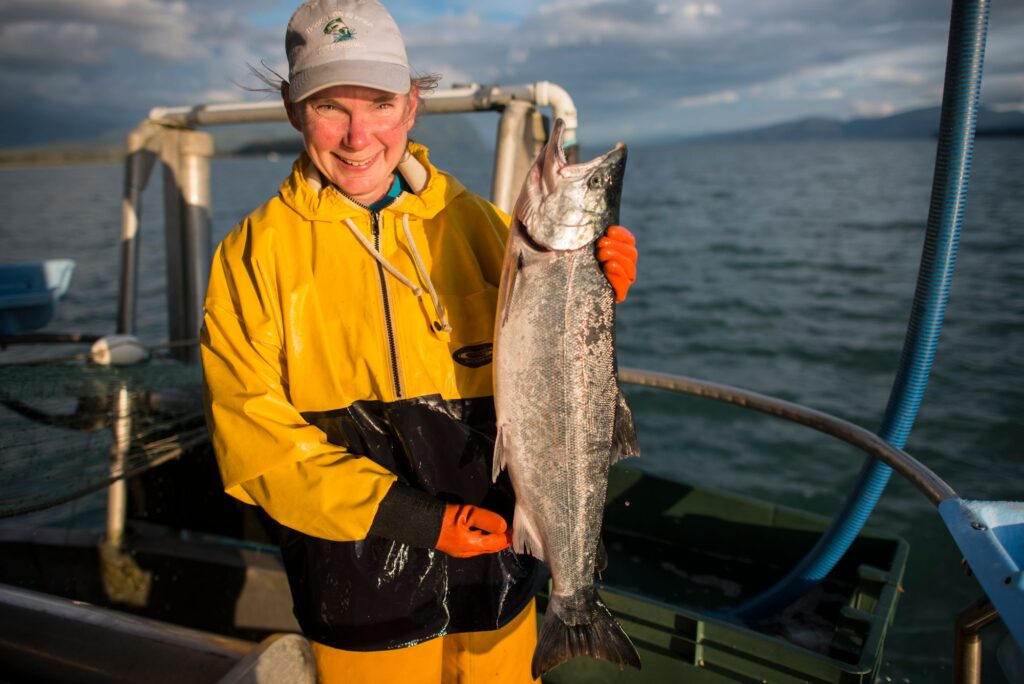 Fishing for Alternatives: How a Boise couple escaped the industrial salmon business by bringing their catch home to Boise

Story and Photography by Guy Hand

After pouring his first cup of coffee, George Meintel climbed out of his fishing boat’s cabin and into the quiet, pre-dawn blue of a southeast Alaskan morning. The air smelled of Sitka spruce and salt water. Chop slapped against the hull. To the west, the glaciated Coast Range of Canada towered like a jagged wall of ice; to the east, the heavily forested Kupreanof Island stood dark and green. It has to be one of the world’s most stunning spots, but Meintel had other things on his mind that morning.

He watched the tide push the current through Frederick Sound as he took a slow sip from his cup, imagining the unseen river of salmon migrating just below the surface from the Gulf of Alaska west to spawning grounds in the nearby Stikine River. His job was to put his 36-foot boat, the Lofoten, and its 1800-foot length of gillnet between those fish and their destination. That’s what Alaskan salmon fishermen do and Meintel, who lives the off season in Idaho, has been doing that for over 30 years.

Once he’d decided where the fish should be, Meintel shattered the dawn quiet by firing up his diesel engine, pulling anchor and motoring on a path perpendicular to those imagined salmon. Once in position, he threw a buoy attached to his gillnet over the stern and started heading across the flow of water, reeling out netting off a motorized drum.

“A gillnet,” Meintel said, “is net that has a weighted line on the bottom and a floating line on the top and it hangs kind of straight up and down like a tennis net.” He continually looked over his shoulder to make sure the net was reeling out smoothly. About then, Cynthia Wallesz, Meintel’s wife and fishing partner for nearly 25 years, climbed out of the cabin and began preparing for the first catch of the day. “It’s such a good place to fish,” she said as she slipped on rain gear and gloves. “The waters are so pristine and the habitat is so pure.” (The Monterey Aquarium’s Seafood Watch program, which rates the sustainability of commercial fishing, backs Wallesz up. The Aquarium gives Alaskan salmon its “Best Choice” or highest rating.)

Although the summer of 2020 was cold and stormy for much of the season, the couple could all but forget the other storm brewing further south: the global pandemic. Though they quarantined when they arrived from their home in Boise and had to fly a black and yellow maritime “Lima” flag, warning of a possible contagious disease onboard, once cleared there was nothing among those mountain-rimmed vistas to remind them of Covid-19.

Still, the tranquility of the water faded each time the couple motored back to Petersburg. One of Alaska’s most active fishing villages and Wallesz’s and Meintel’s summer home, Petersburg is surrounded by beauty and thankfully suffered few Covid cases this summer. But it’s also an industrial town. Two large canneries specializing in high-volume processing and global distribution loom over the docks. Chimneys belch steam, winches whine and seasonal cannery workers from as far away as Latin America and Eastern Europe march into the plants with every shift change (after getting temperature checks and other pandemic protocols). From June through August, Petersburg has the frenetic feel of a gold rush town—but the fishermen’s traditional part in that frenzy ends as soon as their catch is given over to one of those canneries.

That’s why Wallesz and Meintel decided to take a different path years ago. They’d grown tired of merely being the first link in what was often a very long, impersonal food chain. Like cattlemen who tire of shipping their herds to distant feedlots or wheat growers who sell their crops on the commodity market, Wallesz and Meintel yearned to take control of their catch: they wanted to process, package and direct market a portion of their salmon themselves, focusing on quality over volume. But unlike farmers and ranchers who can turn to local markets as an alternative to industrial agriculture, an Alaskan fisherman working in a town awash with fish and other fishermen has to look further afield for customers—and that’s where Boise comes in.

Wallesz and Meintel began shipping small quantities of fish around the country in 1999, when they still lived full-time in Alaska, but decided to make a more personal commitment to Boise when it became one of their more receptive markets. In 2004, they began selling salmon through a vendor at the Capitol City Public Market, then moved to the Boise Farmers Market when it opened in 2013. Still, it took the couple a while to convince Idaho customers that buying fish from Alaska somehow fit the philosophy of the local food movement, but when they found the opportunity to explain face-to-face how hands-on, small-scale and quality oriented their style of fishing had become—in other words how truly artisanal—people got it.

It’s obvious when you’re on the Lofoten that the word artisanal isn’t merely a marketing ploy. Instead of simply tossing each fish into a hold for the canneries to deal with, Wallesz and Meintel pluck the best of the five Pacific salmon species they reel in and immediately bleed, gut and clean them. They then place those fish in slush ice that chills them quickly to 33 degrees. That immediate care goes a long way in preserving the flavor and quality of fish that might otherwise sit for hours or even days in a hold before cleaning.

Recently they began focusing more on eliminating waste. Their custom processor now collects the “spoon meat” from the bones, perfectly good salmon that otherwise would be tossed. They also are carefully processing pink salmon, which, because of its fragile nature, traditionally wasn’t valued for anything but canning. With careful handling, though, pinks can rival king, coho and sockeye.

“It’s a whole lot of work,” George Meintel said of this artisanal approach to salmon fishing. “It’s way more work than taking your fish and giving it to a [big] processor, but it’s been infinitely rewarding.”

The couple finished the 2020 season and flew back to Idaho on October 4th. “It’s great to be back, to be home on solid ground and sunshine,” Meintel said from the porch of their Boise home. Now Cynthia and George are waiting for their catch to arrive by truck so they can begin distributing it to their CSF (community supported fishery), the Boise Farmers Market and restaurants like Bittercreek Alehouse.

When asked if he’ll ever retire, the 67-year-old Meintel scrunches his face up as if trying to decipher some foreign language, which reminds me how he answered that question four years ago when I visited Petersburg.

“There’s nothing more fun than catching fish,” he said then. “And when you turn that diesel engine off after listening to it for 15, 16 hours a day, it’s the sweetest sound you’ll ever hear. And you look around and see what’s all around you and feel like you’re a pretty lucky person.” He took a slow sip of beer and smiled. “There’s just something about wild salmon that makes life fun.”

Apparently, nothing much has changed. Cynthia and George are looking forward to a winter in Boise while also planning next year’s fishing season.

A version of this story was previously published in Edible Idaho magazine.