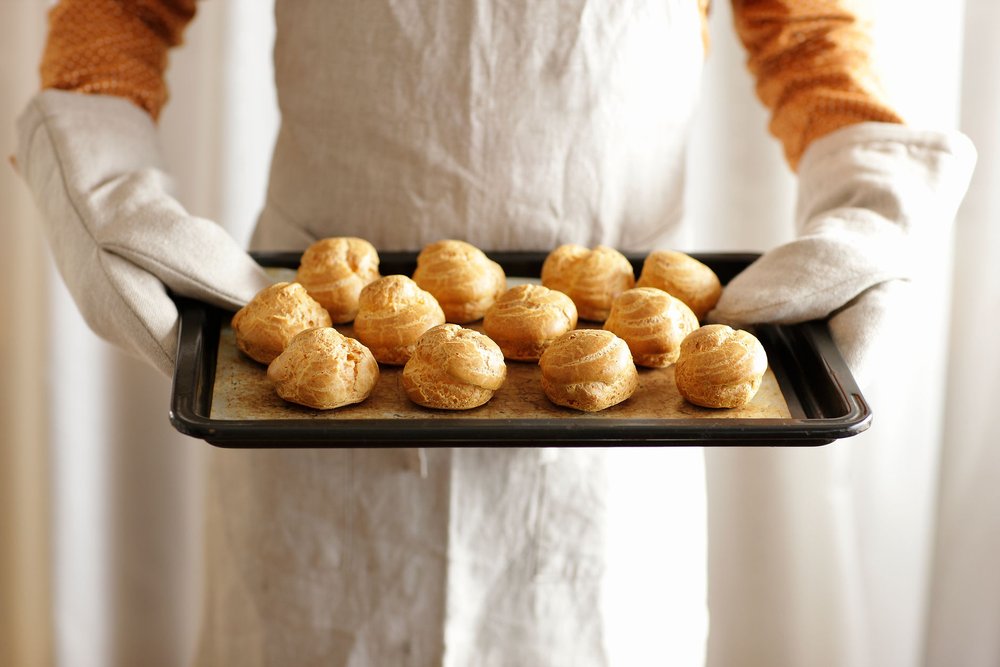 It was the barley crepes that really turned the tide for Brett Stevenson.

She was cooking for her dad, who has been farming in Bellevue since the 1970s. Like many growers in the area, he primarily grew barley for the brewing industry. Stevenson was trying to convince him to get behind the idea of installing a mill to create fresh flours from the prized grains they were already growing.

She made wheat berry and barley salads. And she baked breads with the fresh flours she was making with a small stone mill a friend had gifted her.

“I realized that, after 45 years, he hadn’t been eating what he was growing,” Stevenson said of her father.

It worked. Plenty of economic research helped, too. For her, the mill was a way to offer nutritional benefits, engage in regenerative agriculture, establish a vertically integrated system in the community, and bring a new level of transparency to farming.

“For him, sustainability means economics,” Stevenson said. “And he wants to know if it tastes good. Whereas I’m talking about soil health and community and vertical integration and all these other things.”

The two struck a balance between their approaches and Stevenson was off, researching equipment and working on a design for the mill. In 2019, she launched Hillside Grain, her portion of the family farming business. Her dad still oversees farming operations — he still drives the combine, too — while her brother works on water management and soil health issues.

She now offers freshly milled flours direct-to-customers through her website as well as through a few grocery stores and has wholesale customers in several states.

Throughout Idaho, a small number of bakers and farmers are installing mills to capture the flavor, and nutritional benefits of fresh flours. In Boise, Gaston’s Bakery installed a mill just before the COVID-19 pandemic set in. Their flour is available in numerous grocery stores and they’re gradually incorporating freshly milled flours into their breads and pastries. 1000 Springs Mill, in Buhl, also installed a mill recently and has added fresh flour to their roster of dry goods.

It’s all about the germ and the bran

For decades, most industrial milling has stripped these two components from wheat; sacrificing the nutrients and vitamins they contain in favor of the uniform, shelf-stable white flour that has dominated supermarket bread aisles for decades.

The bran is the outer shell of the grain that holds fiber, minerals, phytochemicals, and B vitamins. The germ nourishes the grain and is packed with antioxidants, unsaturated fats, and B and E vitamins, according to MIT Medical.

At the center is the endosperm, which contains complex carbohydrates and proteins. In most white flour, this is the only part of the grain that is retained. By removing the bran and germ, producers remove oils and fats that can cause flour to turn rancid, which means it has a longer shelf life.

It’s a trade-off that has tipped in the favor of uniform, shelf-stable white flour for decades. But in recent years, a growing contingent of farmers, bakers, and flour producers across the country have been shifting gears and advocating the use of whole grains. Like Stevenson, Gaston’s, and 1000 Springs, they’re installing their own mills to process grains, often grown in closer proximity, in a way that retains more nutrients and still produces flours that are approachable, and easy-to-use.

“Grain is the next frontier,” Stevenson said. “We’ve gone through it with meat and dairy and vegetables. Grain and flour are the next wave of, ‘Okay, let’s take another look at how we do this.’”

“Grain is the next frontier, we’ve gone through it with meat and dairy and vegetables. Grain and flour are the next wave of, ‘Okay, let’s take another look at how we do this.”

At Hillside Grain, Stevenson uses a unique combination of a roller mill along with a stone mill. Roller mills often are found in more industrial operations, where they help remove most of the outer layers of grains. In her operation, the roller mill delivers an already-cracked grain to the stone mill, which allows for a finer flour that still retains many of the minerals and nutrients found in the germ and bran. That also creates a flour that performs more like a standard white flour.

“There are so many types of wheat and ways to mill it,” Stevenson said. “People have to find their own ways of doing it.”

Stevenson tries to mill her flour as close as possible to when it will make its way into her customers’ kitchens. Because she uses whole grains, there is a chance that the flour will turn rancid. That’s not necessarily a bad thing, she said.

Gaston’s Bakery uses a Unifine mill, which employs a high-speed flywheel to pulverize whole grains into a fine flour, while still retaining the flavor and nutritional benefits of the germ and bran.

Choux decided to install the mill after years of conversations and research about gluten intolerance, industrial additives and preservatives, and milling practices.

“People were getting sick from eating bread products,” said Choux in a phone interview from Lyon, France, where he’s helping with the installation of a mill and researching more varieties of wheat. “At first it didn’t make sense. This has been the most grown crop for centuries. It used to make up 50 percent of our diets, now we have all these problems.”

Research about growing practices, such as using weedkillers and herbicides, led to studying mills and reaching out to farmers. Choux now buys wheat from several farmers in Idaho and one in Montana to store in one of the four silos he and his team built. From there, the wheat berries are loaded into bins and fed into a chute that carries them into the mill to be processed.

It retains approximately 90 percent of the grain. The other 10 percent is filtered out and, for the moment, is sent to farmers as feed. A small portion of bran is also sold through the bakery’s storefront.

As a wholesale operation, Gaston’s has had to gradually introduce its new flours into its existing recipes to maintain consistency in its products, particularly for wholesale customers.  In addition to adapting recipes and techniques, the bakery has had to prove the merits of its new flour to some of its longstanding customers.

Though the transition has been a gradual one, Choux said he’s enthusiastic about the possibilities afforded to him and his crew by the mill. He said he hopes to bring back wheat varieties from France to experiment with.

“It’s a very exciting time for the mill, for baking, and for customers,” he said.

In Buhl, at 1000 Springs Mill, co-owner Tim Cornie also recently installed a Unifine mill to process grains. Additionally, he installed a stone mill in a separate facility they’ll use to process gluten-free flours.

Cornie prizes the proximity of the wheat he’s growing to the mill and packaging lines. The wheat travels about eight miles, from the field to their warehouse, an old Pillsbury plant that he and his cousin, co-owner Kurt Mason, transformed into their processing facility.

It was a trip to Europe that shifted Cornie’s thinking. He noticed the health-conscious lifestyle and diet of many Europeans and took it as a wakeup call.

“My friend told me ‘Your food is dead and ours is alive,’” Comie said. “To me, at our mill, when we’re looking at our food, we’re making sure it’s alive. Live food is healthy food.”

For him, the nutrition starts in the soil. He and his team work on soil health, planting cover crops to replenish nutrients and minerals, to ensure the ingredients they’re harvesting also are nutrient rich.

Within the shift to in-house milling lies much headier discussions about access to nutritious foods, environmental concerns, supply chain benefits, and socio-economic issues. But, at its core, it’s about making flour that is healthier and tastes better.

“We’re capturing something that shouldn’t have been lost,” said Dr. Stephen Jones, director of the Washington State University Bread Lab.

Jones and his team are self-described “plant breeders who bake.” They promote access to whole grain breads through community programs and recipes. Their Approachable Loaf is a recipe that uses primarily whole grains to create bread that is “… approachable, accessible, and affordable with no stabilizers or conditioners.”

“We’re doing all this cool stuff with high-end breads,” Jones said. “But we’re missing 95 percent of the community and that 95 percent wants sandwich bread that is soft and sliced.”

Jones also is working on developing varieties of grains that address environmental issues, such as water scarcity and the use of fossil fuels in harvesting.

For example, perennial wheat varieties develop deep root systems, some up to 15 feet deep, that retain water and sequester carbon and only require one pass with a combine, as opposed to 6 or 7 trips for other varieties. Winter wheat varieties also address some of these same issues. By planting in the fall, these types of wheat are fully developed by early summer, when water usage sometimes can be a problem.

“We’re capturing something that shouldn’t have been lost… approachable, accessible, and affordable with no stabilizers or conditioners.”

Last year, in Bellevue, Stevenson said her family’s irrigation was turned off at the beginning of July, a critical time when grains are developing.  She had planted several acres of winter wheat the previous fall, which already had matured by the time water was cut off.

“Everyone else is in crisis mode and I have seven acres of [winter wheat] that’s perfect,” she said.

With bleak water predictions, the need for alternate growing methods is increasing, she said. Winter varieties might be one piece of that approach.

“If we get two to three years of that, farming won’t exist here as it does now,” Stevenson said, referring to irrigation waters being shut off in early summer months.

While the scope of changing industrial farming to address issues of climate change and nutrition seems daunting, many of the growers and bakers interviewed for this article are realistic about their approach. Instead of trying to change the entire system in one fell swoop, they think of it as a gradual process.

‘Where Did All The People Go?’