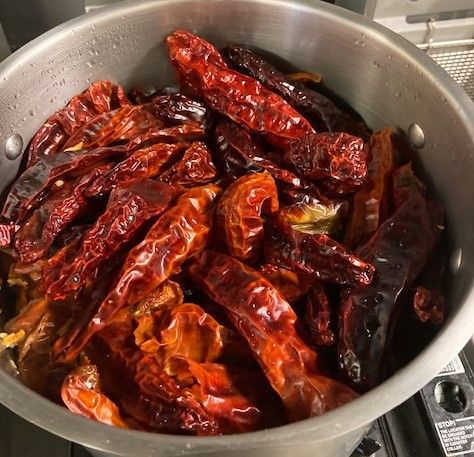 The Choricero: This is the largest of the Basque peppers at 4-8 inches long, with a meaty texture and sweet flavor. It’s used in signature dishes like chorizo, tongue sauce, and bacalao a la vizcaina (codfish stew). Choriceros are picked young and green for frying, or picked red and mature, then dried and hung in a style similar to New Mexico chiles. To make chorizo, the dried peppers have to be reconstituted. “You break off the stems and get rid of the seeds, put the dried pods in water, bring it to a boil, then you turn off the heat and cover it and let it steep for anywhere from an hour to 24 hours,” Ansotegui explains. Then, the peppers are drained and pureed into a sauce that’s added to the sausage.

The Anglet: One of the three basque “fryer” peppers, these skinny green peppers can reach 5-6 inches long. They’re sweet, mild, and ideal for frying. To try your hand at preparing some, check out “Rodney Wray’s Fried Anglet Peppers.”

The Espelette: These small, spicy red peppers are found on the French side of the Basque Country. Like choriceros, they’re often hung to dry. Instead of reconstituting them, though, Basue cooks prefer to grind espelettes into a spice known as “pimenton.”

The Gernika: These fryers are delicious fried gently in olive oil and sprinkled with salt. They’re usually 4-6 inches long, with tender skin and a more delicate texture than choriceros. They’re typically sweet, but like Russian roulette, Ansotegui says that you’ll hit a spicy one every eight or 10 peppers.

The Guindilla: This is another long, skinny green pepper that’s great for frying. Though it looks identical to its sister pepper, the anglet, the guindilla is on the spicier side. When it’s not fried, you can find it pickled and served with charcuterie.

The Piquillo: These sweet, slightly piquant red peppers look like 2-inch Bell peppers, and are ideal for stuffing or canning. You can find high-quality canned piquillos at The Basque Market in Boise. Ansotegui likes to cook up the canned peppers with olive oil, sliced garlic, the juices from the can, salt, and sugar, and let them simmer. They’re delicious on sandwiches, paired with pork loin, or alone as a side dish.