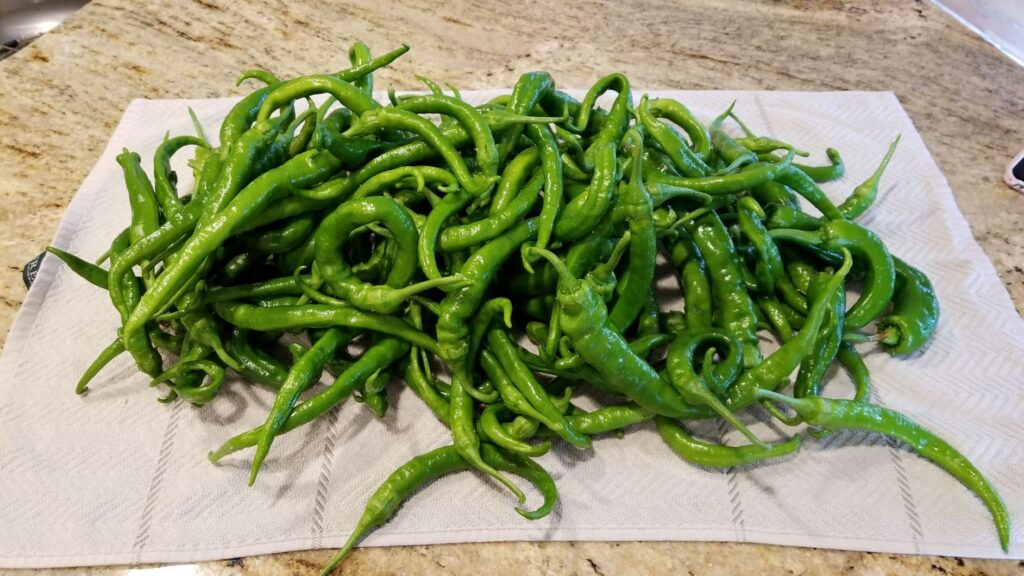 The Epic Journey of a Pepper Seed: How Basque peppers crossed the Atlantic (twice) to become a Boise culinary specialty

No one knows how the very first Basque pepper seeds arrived in Idaho from the Basque Country, that long-contested, culturally-rich region in the mountain cradle between France and Spain. No one is even certain which pepper came first.

Was it the choricero, the meaty, 8-inch pepper that gives chorizo sausage its signature ruddy color? Or the anglet, the bright green fryer that’s so delicious dusted with Maldon salt? What about the espelette, the gernika, the guindilla, or the piquillo? Like so much about Basque peppers, this history is shrouded in secrecy.

The Origin Story
What we do know about the primordial pepper is that before it hopped the Atlantic to the U.S., it made an equally long journey to Basque Country. That’s right: If you go back far enough, Basque peppers aren’t Basque at all.

“By origin the Basque peppers come from Mexico, or at least North America,” said Dan Ansotegui, a Basque musician, restaurant owner, and culturalist who lives and works in Boise. “When they were taken back [to Basque Country] because of the climate, because of preference, because of the soil, over the years and the centuries those peppers became a milder pepper than they were.”

By most accounts, Basque peppers traveled from Mexico to Spain, and thus to Basque Country, with the conquistadors in the 16th century. Over the next few hundred years, what were once chili peppers took root both literally and culturally. Today, many of the dishes that are considered Basque — like chorizo, angulas (baby eels), Bacalao a la Vizcauba (Basque-style cod), and solomo sandwiches — involve the liberal use of one or more Basque peppers.

When Basque people began to immigrate to America, they brought their peppers with them. As early as the 1930s, Ansotegui’s family was growing Basque peppers in the Idaho mountains.

“In the ‘30s when my mom was growing up, they had Basque peppers in their garden in Hailey, and they used those to make their own chorizos and stuff,” Ansotegui said. “So she was getting seeds over here in the 1930s and ‘40s.”

Another Basque immigrant family, the Hormaecheas, can date their peppers back at least as far, placing them in the Marsing/Homedale area around the same time.

“[My father-in-law] remembers his father having the choriceros clear back in the early ‘40s or late 1930s, so he had brought seeds over and was growing them then,” said Rodney Wray, an avid gardener and self-proclaimed “pepper pusher” whose wife, Amy, is a Hormaechea.

A Legacy of Smugglers
But how exactly did the peppers that these families planted generations ago cross the Atlantic? Well, mostly likely in deep secret, wrapped up tightly and protected by lies of omission. You see, in order to get through U.S. customs, travelers are required by law to declare any agricultural products in their luggage — including fruits, vegetables, plants, soils, and seeds. According to Ansotegui and Wray, ignoring this rule in order to ensure prized pepper seeds safe passage is a Basque tradition perhaps as old as immigration itself.

“Traditionally they were brought back by people who traveled,” said Ansotegui. “They were something that they usually had to kind of sneak in, you know… If we bought seeds in packages in Spain we were allowed to bring those in. What we weren’t allowed to bring in was just seeds wrapped in plastic wrap and stuck in your suitcase. And 20, 30, 40 years ago that’s what people did.”

Wray is one of those people. On a 1999 visit to the town of Guernica in the Basque Country, Wray’s wife’s cousin, Manu, agreed to hand over some of his prized choricero seeds. Wray couldn’t resist bringing them back to his garden, even if it meant lying his way through customs.

“I’m sure I broke a lot of ag laws bringing them back to the U.S.,” Wray said, chuckling. “… I hoped no one looked in my suitcase. I think I probably wrapped them in the middle of my dirty laundry.”

Today, it’s much easier to get your hands on Basque peppers — and Basque pepper seeds — than it was in the 1930s, or even the 1990s. Casey O’Leary grows gernika peppers at Earthly Delights Farm in Boise. At Canyon Bounty Farm in Nampa, Beth Rasgorshek has been known to grow piquillo peppers, while Peaceful Belly Farm in Caldwell has produced both chericeros and anglets in the past. Most varieties of Basque pepper seeds can also be purchased online. Idaho’s local Snake River Seed Cooperative (SnakeRiverSeeds.com) offers gernika and piquillo pepper seeds, for example, and even national online seed stores like Terroir Seeds and The Hippy Seed Company have seeds on sale.

‘The Pepper Mafia’
This proliferation is the legacy of seed sharing, which is both the pride and the bane of Basque pepper growers. Some growers are happy to share their bounty when asked. O’Leary, for example, got her first batch of gernika seeds from Leno Zabala, who once grew them for the restaurant Leku Ona. Wray, too, will share his peppers and even plant starts with friends. He grows anglet and choricero peppers every year (this season, he’ll harvest from 150 plants), and has been known to hang bulging bags of peppers on the classroom doors of his fellow teachers at Borah High School.

However, there’s also a time-honored dark side to seed sharing: thievery. According to Wray, Basque pepper growers are a competitive bunch prone to pinching each other’s wares in search of the best producing, tastiest, or most genetically pure plants. In 2015, Edible Idaho reported that every spring, 20 families of Basque pepper growers drop their heirloom seeds off at Edwards Greenhouse in Boise. There, the staff plants and cares for the seeds until they become seedlings, carefully keeping each family’s crop separate to preserve the characteristics passed down through generations of seed saving. Soon though, Edwards had a problem: the growers, who Wray jokingly calls “the pepper mafia,” had begun to filch each other’s plants to see how their own family’s peppers measured up. Eventually, Edwards resorted to numbering the seedlings instead of labeling them with family names “to prevent pepper fraud.”

This year, Wray got fed up with the complex coding system and decided to put his name on his peppers, along with a number for each variety. Immediately, he was reminded of why Edwards’ anonymous system started.

“Interestingly enough, someone stole some of my [pepper plants] from the flats, because it had my name on there,” he said. “It’s fine, I still had plenty of peppers, but I’m sure it was one of those other old Basque pepper guys who was like, ‘Oh, these are Wray’s plants!’ because it had my name and it didn’t have the variety. They grabbed a four-pack of my No. 1s and my No. 2s so that they could see what I was growing, which I think is hilarious.”

The bottom line is this: Basque pepper seeds are special. Choricero or anglet, espelette or guidilla, for growers they’re all edible gold. They’re seeds worth stealing from dark gardens, smuggling past TSA agents, and planting in isolation from each other to avoid genetic drift. And in the eyes of long-term growers like Wray, not all Basque pepper seeds are created equal. A pack of choricero seeds bought online for $4.99 will never live up to the packet he got from his cousin-in-law Manu’s own hands.

“Those probably are descendents of the same pepper plants that my wife’s aichiche [grandfather] grew, and that his parents grew, and his parents’ parents grew. So who knows how many generations back those seeds go in the Hormaechea family,” he said. “So they’re something to me that just kind of makes me connected to them.”