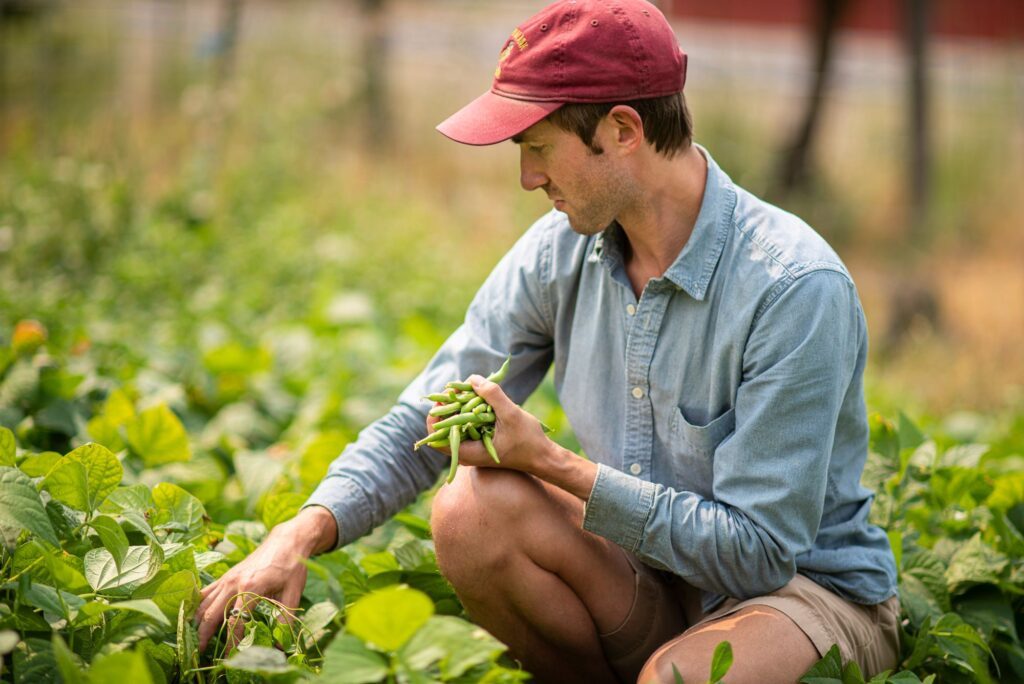 From Stage to Field: How a professional dancer finds a new calling on the farm

The good ones stick around year after year; passed between researchers, friends and family, fellow farmers, and so on.

For the Idelight bean, that path has spanned nearly 70 years. Bred in 1951 at the University of Idaho’s Bean Research Laboratory near Twin Falls, the snap bean has been a favorite among growers in the know since it was officially released to the public in 1964. Recently, however, it started to make its way into Boise restaurants.

Perry planted the bean this spring on several plots at Meadowlark Farm, where he’s been gradually honing his farming skills for years. With a summer of dance performances decimated by the spread of COVID-19, Perry realized he would have a full, uninterrupted growing season here in the Treasure Valley.

He planted a variety of crops, mainly to sell and give away to friends, but the beans took up the largest part of his available land. Most of the green beans have gone to the downtown restaurant KIN, as well as to the catering company Wild Plum.

“The bean was bred here in Idaho, planted in Idaho, sold to people here, and whatever is leftover is fed to the sheep, or put into compost to be used next year when I grow these again,” Perry said. “I love that there’s this cyclical Idaho story about this bean.”

Initially, the Idelight green bean — Phaseolus vulgaris — was created to address curly top and seed-born mosaic, two viruses that had been damaging crops in the Pacific Northwest. The bean’s creator, Dr. Leslie L. Dean, also sought to improve the structure of the bean itself to allow for easier, more uniform processing. One key feature was that it was stringless.

“That wasn’t the norm in that era,” said Kathy Williams-Stewart, area manager for the South-Central district of the Idaho Crop Improvement Association. “And no one wants to string beans.”

Though they haven’t met, Williams-Stewart is a key link in the chain that brought the Idelight bean to Perry.

Williams-Stewart used to work in the dry bean breeding program at the University of Idaho’s Kimberly Research and Extension Center.

“Everybody on the farm loved that bean,” she said. “We always planted a few rows. We’d eat it, pickle it, bring it home and use it for Bloody Mary’s on Sunday.”
When she moved into the foundation seed program at the university, Williams-Stewart came into contact with seed farmers such as Beth Rasgorshek, of Canyon Bounty Farm, as well as Burns, who often grows seeds in addition to the sheep and chickens she raises.

“She was telling me about her favorite bean,” Rasgorshek said, referring to her meeting with Williams-Stewart. “And then she reached her hand in a bin and gave me some seed.”
Rasgorshek tried it out and liked it enough to put it in her rotation of crops. She would grow it every once in a while and would save the seeds.

The seeds made their way to Burns, who grew a field of the beans to help fix nitrogen in her soil as well as to collect more seeds. Last season’s seeds had been stored away in a bucket in a walk-in cooler. That’s where they were when Burns suggested Perry give them a try.

For Perry, who hadn’t grown beans before, the Idelight offered an opportunity to test his hand at a new crop, and experiment with successive planting. By staggering plantings, Perry was able to extend the life of the bean, which can be important when selling to restaurants.

“[Burns] helps with weeding and watering, and gives me pointers, but it’s mostly my responsibility,” Perry said. “I have to think about where this food is going to go and how I’m going to move it. I have to be planning all of that when I put things in the ground. It’s really the first time I’ve have to think about that.”

Though it’s taken some adjustment, Perry said he’s adapting well to his newfound lifestyle. Some nights, he’ll sleep in a small outbuilding at the farm in order to cut out an early morning commute and help motivate himself to get started early.

“I have to treat it like a dance rehearsal,” he said. “If class starts at 9, you have to be there, warmed up, ready to go, on time.”

Despite the sudden shift in his life, Perry said he values his time at the farm, and the access and mentorship Burns provides.

“It made me think, ‘What would this look like if this became more of a realistic world for me?’” Perry said, referring to farming. “For however many years it’s been mostly dancing and trying to fit in the farm whenever I could between rehearsals and travelling. Now it’s flipped. I’m liking the feeling of it and it’s been an amazing gift to be at the farm pretty much full-time.”