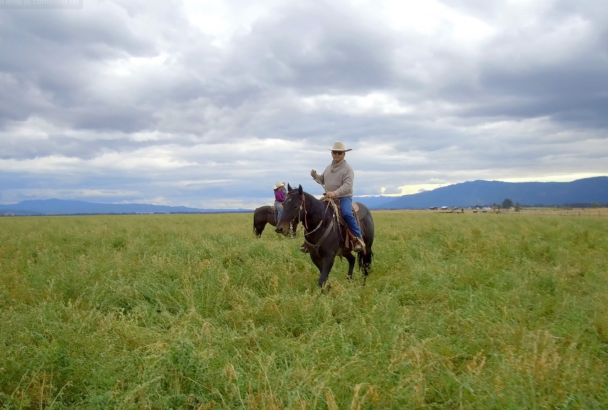 Story and Videography by Guy Hand

We woke up before dawn, grabbed our video gear from the motel and headed to a cattle ranch south of McCall. The fog was dense and the air chilly enough to remind us that winter was only weeks away. As we drove, neither Michael Cullen nor I had confidence that we’d get what we’d hoped for. The sky was the pre-dawn grey of a galvanized water trough and the mountains that flanked us, mere smudges on the eastern and western horizon. I zipped my parka to my chin.

When we got to the ranch, we followed blurry headlights to Bob Howard’s crew, a mix of family and friends who were there to round up cattle and truck them to lower elevations and warmer winter weather.

The crew spoke softly as they saddled up in the glow of those headlights. Michael and I pulled cameras from our bags and tried to find exposures that would register the gloom. It occurred to me that we’d still have time for a good breakfast back in McCall if the weather got any worse.

Then the sun crested that Eastern ridge and the world instantly changed. Shafts of light stabbed the fog and turned it ethereal. We ramped down our exposures, grabbed a drone and more lenses and left the notion of breakfast behind.

Michael and I were exactly where we needed to be.